In many rivers in Finland, such as the Tana river (Tenojoki in Finnish), fly fishing already has over a century of tradition. Fly fishing traditions for the Tornio river from the 1800s or first half of the 20th century are not found in written texts or in common knowledge. For a long time after increasing the salmon stock of the Tornio river in the early 1990s, the idea persisted that the river was not suitable for fly fishing. That myth however has been proven completely false over the past 20-30 years.

Fly fishing has grown in popularity, especially among fishing tourists. Since the Tornio River is such a big river, you need to know where to fish and which kind of lines to use during the season. Luckily, in many places, rapids are so powerful, that salmon run very near the river banks. The Tornio River is long and full of amazingly good salmon pools. In the lower part of the river system, the river is big and powerful, but in the upper parts and its tributaries, there is less water and river is not so wide. You have fast running pools and stable holding pools with great scenery and peaceful landscapes.

Where to fish in Tornio River?

The Tornio river is a powerful river, and the core strategy for fly fishing is to find the right places to fish. You have to find fairways close to the shores that the salmon use to run upstream. When fishing for migrating salmon, the best places are usually the rapid necks and pools, where fish rest for a moment. There are also necks and spots mid-rapids called “running pools”, where you might find salmon swimming but still willing to take the fly. Near the end of the fishing season, when there are fewer migrating fish, neck pools and holding pools are areas worth trying.

How to fish in Tornio River?

Due to the large size of the river and especially at the beginning of the season, the absolute rod of choice is a two-handed salmon rod. In the cold waters at the beginning of the season, the fly should be allowed to reach the same depths that salmon are swimming. The surface current is strong, and the river often swells with floodwater. At the same time, use heavy sinking lines, like 4-8 sinkers. The flies can be large and visible, and tube flies are popular. As summer progresses, and the water temperatures rises to about 10 ˚C, you can fish with floating or slower sinking lines. At the same time, leaders are longer and the flies are smaller. This usually happens the week before midsummer. From this point on, the choice of line and fly are determined by the water temperature and depth. Usually, July is the warmest month of the season, and fishermen use floating lines, long leaders and small flies. At the end of the month, the size of the fly can grow again, but the number of flies should be more varied than at the beginning of the season.

Technically, most of the time spent fishing in a large river, you will traditionally cast a 45˚ angle downstream, swing your fly until bank and take a pair steps downstream. It rakes the migrating fish efficiently and is suited especially for cool water floating speed. In midsummer, it is worthwhile to head more across the river and give the fly more speed. Even casting upstream and quick stripping of line can bring results. Surfboard flies and riffling hitches should not be overlooked either. It’s never a good idea to stay locked into a single method when salmon fishing. Our guides will help you find the right tackle and techniques for catching salmon under different conditions.

Reel: The most important thing about a salmon reel is a functioning brake and sufficient spin capacity. Other things like model, manufacturer and design are flavors. The reel must fit at least 200 meters so it can reach the maximum slope.

Lines: You can never have too many lines when fishing for salmon. We mostly fish with interchangeable lines because it’s more convenient to adjust the fishing depth. However, it’s a matter of taste what kind of lines you favour, or whether you fish with shooting heads, spey or skagit lines. In any case, it is important to have lines with different sinking speeds. There must be at least a floating, sink 2 and sink 4-5 lines to cover different situations.

Leader lines: For summer fishing, a tapered or longer taper cone is used at strengths of 0.30-0.50 mm. In low water and at the end of the season, leaders can be as thin as 0.30 mm and long. From the beginning of the season, the leader line underwater can be only 0.5-1.5 m, and it must have uniform strength of 0.40-0.50 mm. For smaller flies, a longer leader, and for larger flies a bit shorter. Those are the most important rules of thumb.

Flies: Many traditional salmon flies work in the Tornio River. Due to the large amount of water, large tube flies are often used at the beginning of the season, and when the water has warmed up, the size of the flies is reduced and hooked flies become more common. Some common models include: The Usual, Banana, Sunray Shadow, Green Highlander, Phatagorva, Red Butt and Willie Gunn.

The most traditional way of salmon fishing on the Tornio river.

Unique opportunities for salmon fishing at the big and mighty River Tornio. 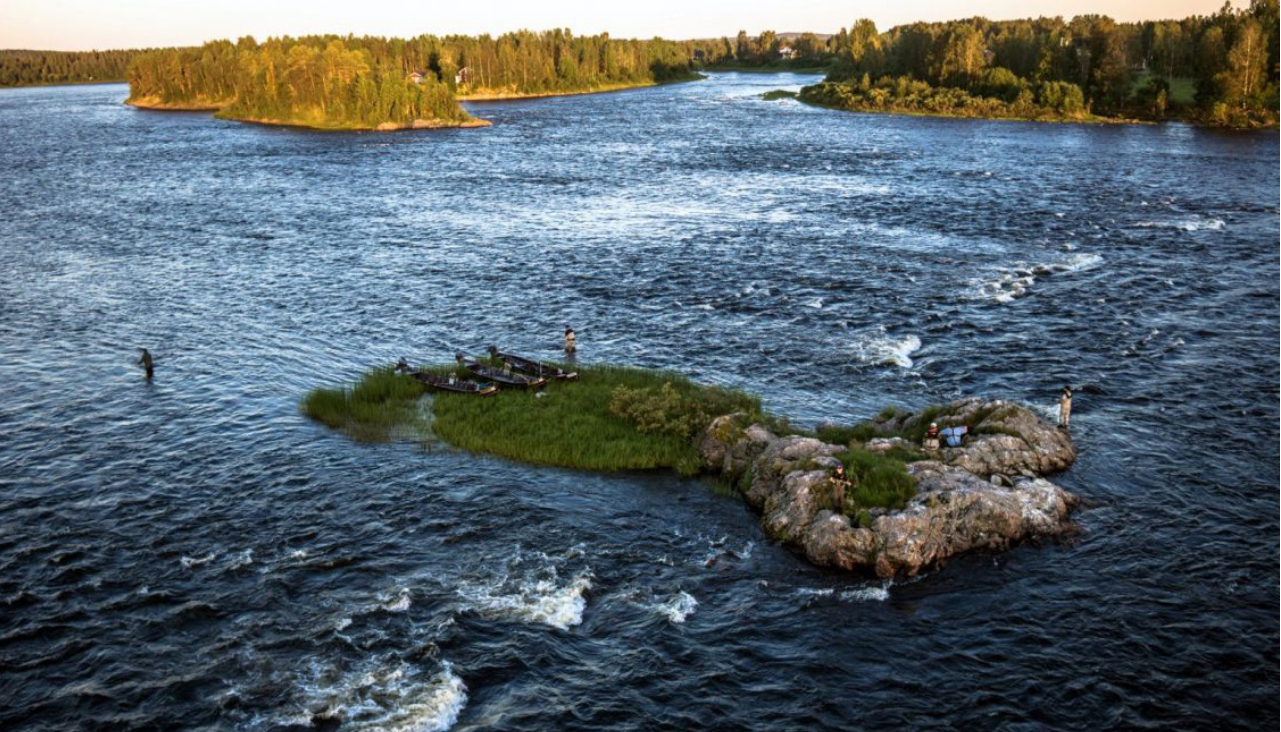 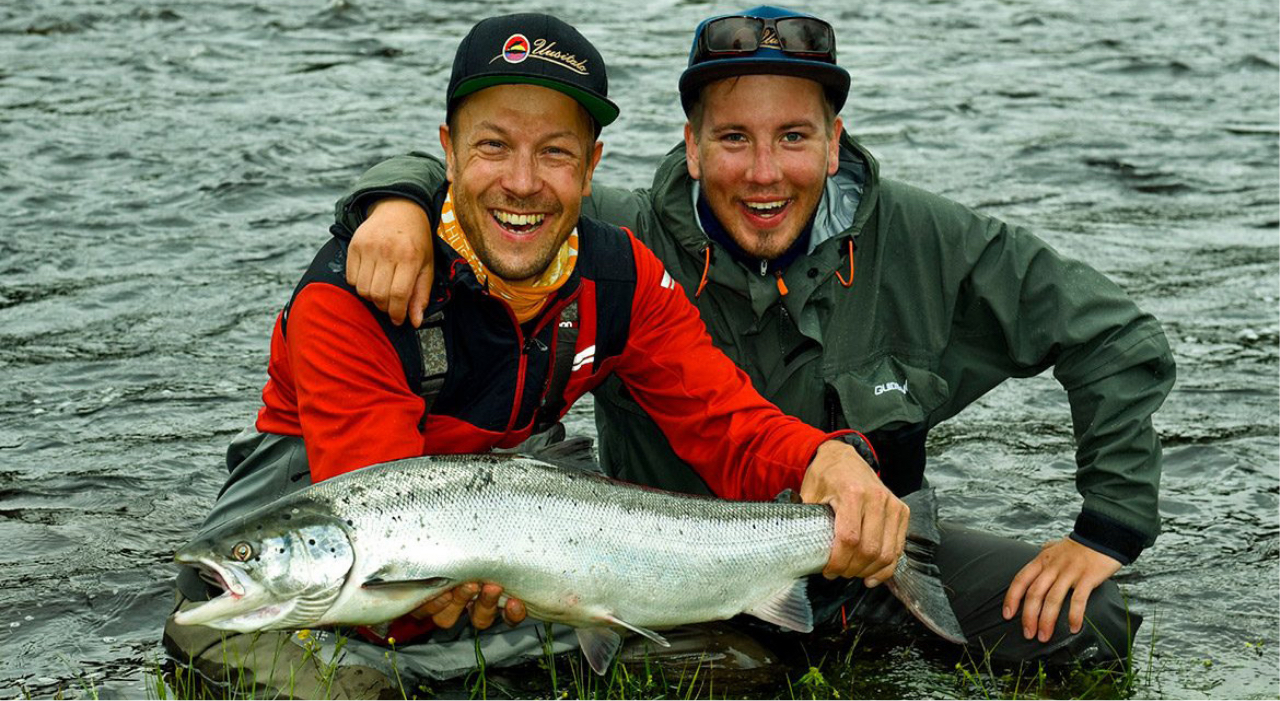 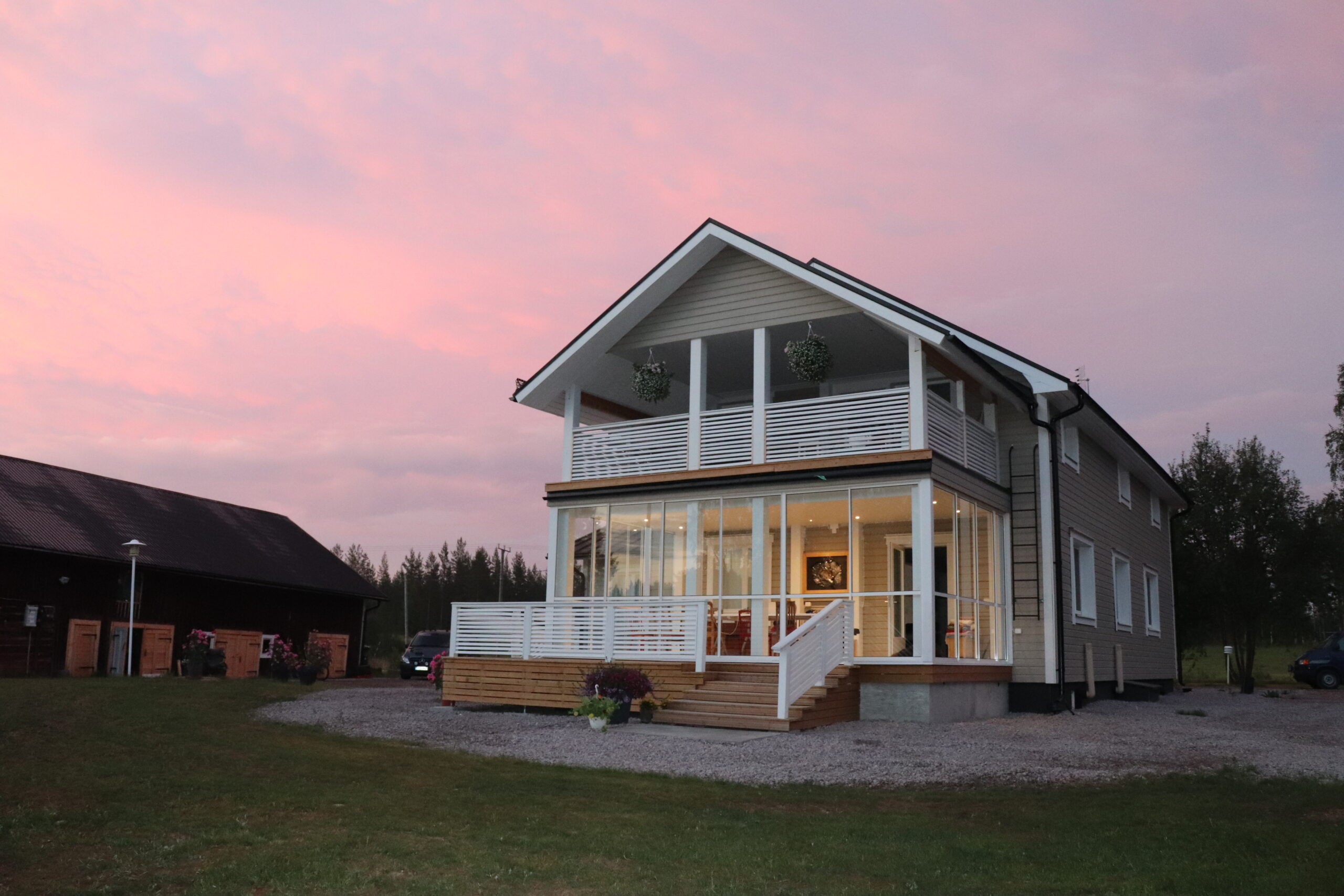